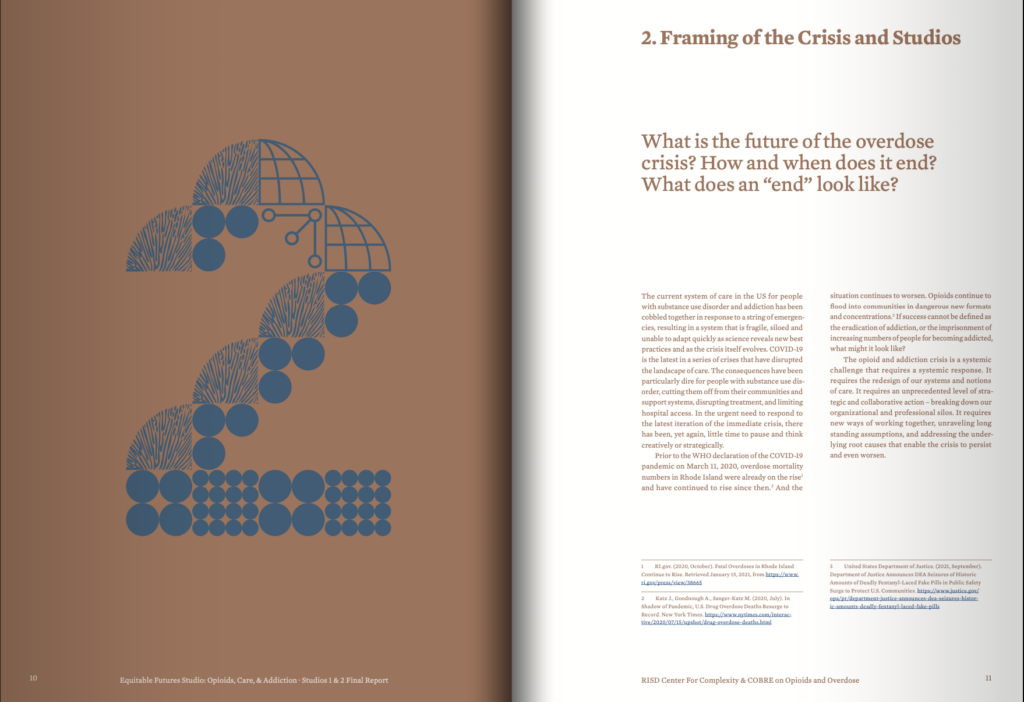 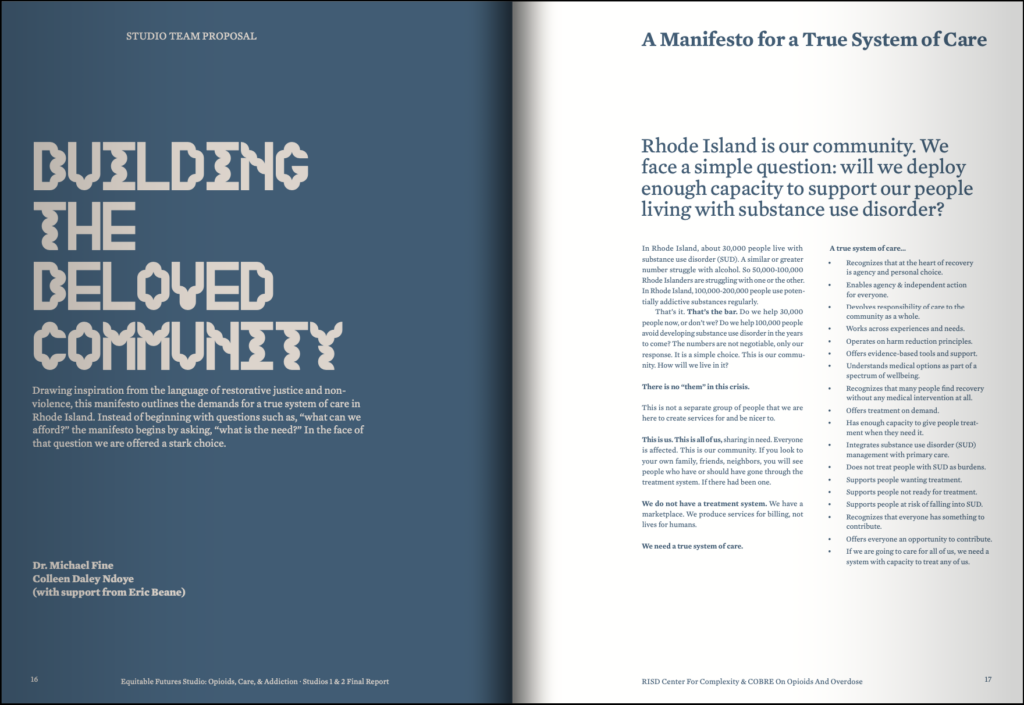 In July 2020, the CfC began a collaboration with the COBRE on Opioids and Overdose to create a mechanism for systems change in Rhode Island. In March 2021, with support from the NIH, the CfC and COBRE initiated a six-month process of design-led discovery organized around two intensive RISD-facilitated studios. The design studio format brings together a diverse group of stakeholders working across a shared challenge and provides a platform for open, guided inquiry into problems for which there are no simple or totalizing answers. Studios are a venue for research, experimentation, insight generation, and creativity — they accommodate the mess that comes with navigating uncertainty and embracing complexity as a matter of process. The studios set out to create a coordinated, interdisciplinary effort, and a structure for collaborative redesign and innovative solutions.

During development of this proposal and the launch of these two studios, the US experienced dramatic changes in the overdose epidemic. 2020 resulted in the highest rates of accidental overdose deaths ever to be recorded in Rhode Island. COVID-19 played a role in the increase, but when the WHO declared the pandemic in March 2020, overdose mortality numbers in Rhode Island were already on the rise. On the policy front, RI Governor Dan McKee signed Rhode Island’s historic harm reduction center into law — the first US state to do so — on July 7th, 2021. The next day, fifteen US States reached a deal between Purdue Pharma, advancing a $4.5 billion opioids settlement. The ground was shifting and we had an opportunity to shape a changing system with a view to the long term, human dignity and healing.

The CfC and COBRE assembled a cohort of thirteen people working in and around the overdose challenge. We divided the group into two themed studios and five emergent subteams. Over the course of July and August 2021, the teams devoted a great deal of time to wrestle with the mismatch between what we have and what we need to address the overdose epidemic in Rhode Island. Facilitated by our designers at the CfC, with support from RISD research assistants and COBRE staff, the teams collaborated on proposals each with different areas of focus. They moved back and forth between big visions and tiny, consequential, details. They questioned everything — the nature of the systems in place, the starting points we offered, and the problems behind the problems. Taken together, these proposals form a portfolio of ideas for designing a robust system of care in Rhode Island.

While the first 2 studios are now complete, we will be sharing the work and rigorous thinking that came out of them (report and videos coming soon).  All of the proposals will need further development, feedback, and iteration with more stakeholders. Each idea will need to be matched with a champion, resourced and stewarded through a challenging context. In some cases, ideas will need to be further incubated, enabling them to evolve and improve with the primary objective of making positive impact through strategic improvement of the system. The intention for this work is to be the basis for action. A tool to be used to instigate conversation, provoke discussion, advance questions, move ideas forward, and inform funding and implementation. 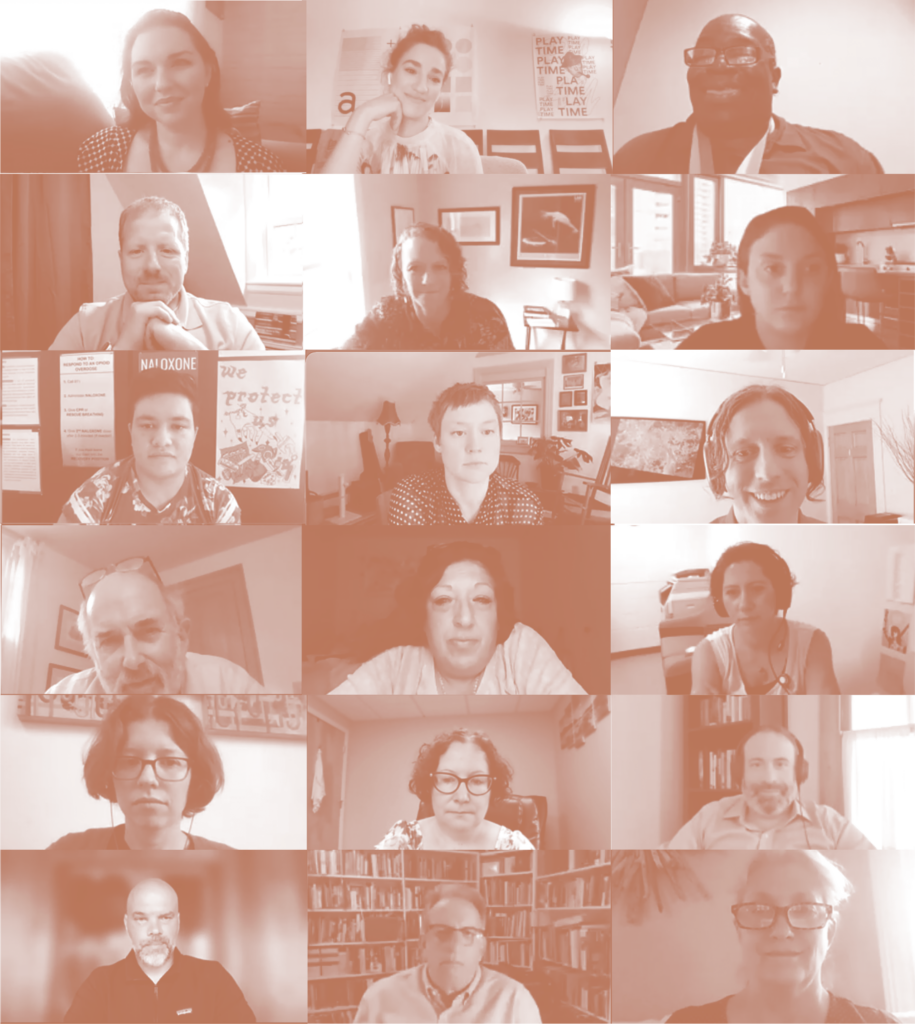